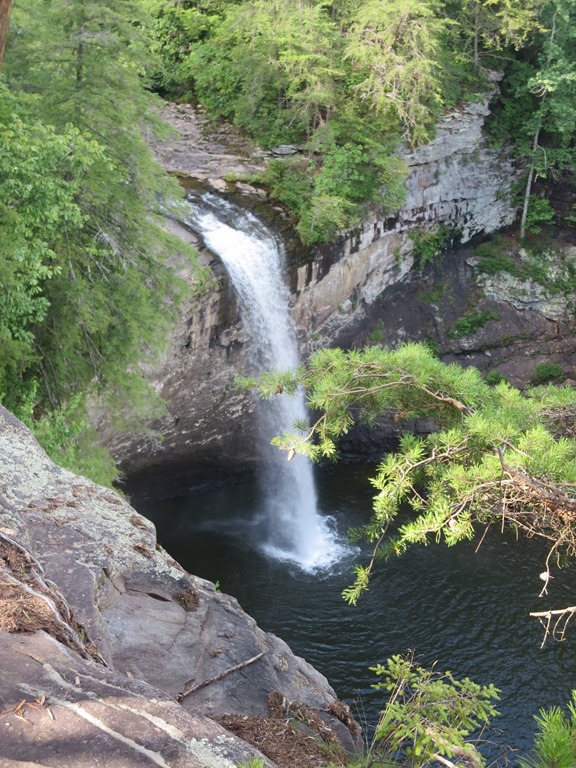 Scott thought a quick stop in Alabama to add another state to the kids’ map would be a fantastic objective for today.  So after a delicious breakfast of French Toast and the most amazing showers we have had the entire trip (complete with temperature control and no need to press buttons to keep the water flowing), we headed towards Russell Cave National Monument.

Forty-five minutes southeast of Tim’s Ford we stopped at Sewanee Natural Bridge. The bridge was only twenty miles from Tim’s Ford, but the roads were of the scenic twisty variety.  Scott came across the bridge from roadtrippers.com

The kids were leading this hike and they led us right off the beaten path into the brush.  It is difficult to get Cody to drink enough.  His motivation to drink this morning was wanting to give the water back to nature off the bridge.

New state for the kids – Alabama!

We arrived at Russel Cave National Monument and had some lunch while we started the Junior Ranger books and activities.

We met an awesome park ranger named James.  James spent close to two hours with us between the visitor center, guided cave tour, atlatl demonstration, and helping Brooke complete her Junior Ranger book. In fact, I am pretty sure we would still be there days later trying to finish that Junior Ranger book if it weren’t for help from James.

James gave us a list of ideas for places to camp and climb.  Thanks to James’ recommendation we headed from Russell Cave in Alabama back to TN to Foster Falls to camp and climb. We were initially headed to go through Chattanooga this afternoon, but James mentioned the traffic backups.  We decided we might hit Chattanooga when it wasn’t the start of afternoon rush hour. This is why we have a rough outline of our trip when we leave home, but we don’t have every day planned down to the moment.  We can be free to learn about and explore new places recommended by locals.

It would be nice if every ranger experience could feel more personal instead of over one hundred people on a tour. It is understandable why it doesn’t happen.  We are just thankful James had the time to share with our family today.

After the short park video we went on a ranger guided tour of the Monument. We learned that you can crush a buckeye and use it to stun fish.  James told us how the areas water drains through the cave.  He has had to pull car tires out of the cave before.  Unfortunately, we aren’t allowed to walk through these caves, but we did get to learn about the history of the area.

Ranger James took the one and only nice family photo we have from this entire trip. James gave an atlatl demonstration. Scott was itching to try the atlatl, but James told us due to new safety regulations no one can try the weaponry anymore. The atlatl is a levered spear launcher.  We also learned about Jewelweed.  It acts like Cortisone and helps heal Poison Ivy.  You know it is Jewelweed because the leaves look silver in water because of the air trapped by the hairs on the leaves. We finished up the Junior Ranger Badges and headed to Father Adamz Campground.

The waterfall was captivating.  We hiked to the primitive camping first. Then we hiked down to the falls.  Scott had told us, “Let’s go for a quick hike.”  Turns out it was more like two miles.  It was hot so the time at the falls was incredibly soothing.

I was determined to swim to the waterfall.

Cody worked hard balancing rocks on a log while the rest of us swam in the cold, cold water.

Scott cooked us up a dinner of chicken and noodles.  Cody worked hard on making words with the Bananagrams again.  Of course some potty words inspired by Scott’s games last night had to sneak their way into his creativity.

Brooke came up what she thinks I always say, “No. Say please.”

The campground is currently closed as it is changing management.  The sign actually says, “Campground closed. Tent camping only.”  It was a little confusing.  So…after a suggestion from someone else we drove the van close to the gate and hiked everything we needed to camp over and up to the nearest site.  Brooke claims she fell over backwards carrying the tent.  There are no witnesses except the bugs she squashed.  However, our sources tell us she did manage to get the tent up the 200 feet from the car and survive.  It was close though. It would have been a quiet secluded night of camping, but we had some younger folks bring their party on up to the campground around midnight.

We are still packing…