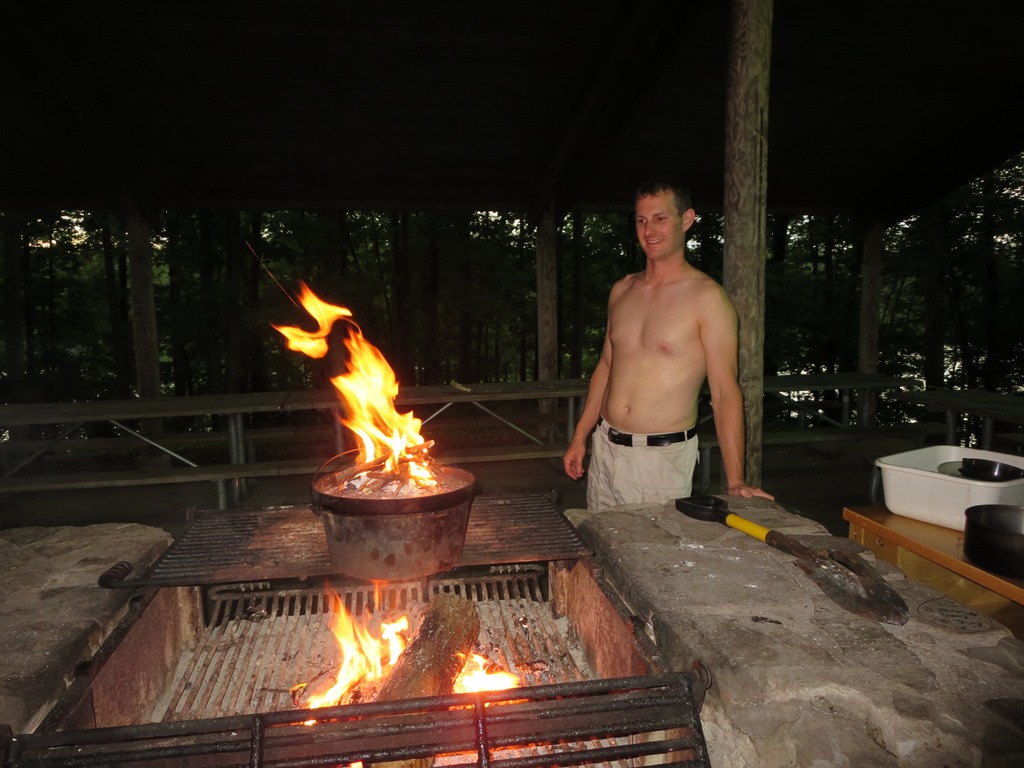 This was one of our favorite days, and not just because it was our fourteenth wedding anniversary, but because we hiked, canoed, and had an incredible dinner and evening together.

“Dun, dun, dun, dun, dun, dun, dun…”  Cody woke me up by serenading me with the Star Wars Dark Side theme song.  Scott got in an hour and a half bike ride around the dam.  I offered to cook something up for the kids for breakfast, but they just wanted cereal.  While we ate we watched a bird wrestle with its breakfast of a tasty green caterpillar.  As soon as the kids finished breakfast they were back to playing with our water spigot and recreating the land with rocks and muck.

We visited the Lost Creek visitors center which had some birds and helpful staff who looked up butterflies and plants we saw and wanted to identify.  Brooke pointed to the sign before the first bridge, “Maximum six people.”  “That means this is going to be a good one!” she excitedly shouted.

Brooke thoroughly enjoyed watching my face turn green as the family waited patiently for me to get on the suspension bridge and they giddily jumped up and down. We hiked about 1.3 miles each way.

We came across a gentleman who was working on his thesis in the woods. He was comparing tree wounds on certain varieties of trees in rural and urban areas.  Cody fell on the steep and super rooted sections of the trail.  Scott got him back to hiking by having him lead.  The kids are always competing to see who is going to lead.  Brooke has an entire foot in height on Cody so he isn’t usually the one to lead.  Consequently Cody leading made Brooke become an anchor for most of the hike.

The family was pleasantly surprised to come across another suspension bridge to shake the momma on.  The picture up and to the right is of some fungus on a log.

Cody was extremely excited to be halfway done with the hot hike and took out his celebratory chocolate teddy grahams as we rested on a bench.  The hike was to the Lost Creek Overlook, but it was so grown over that we were only able to overlook lots of green vegetation. Even better, the hike back after the lookout was paved.  Cody wasn’t tripping over roots and rocks anymore. He was even able to mobile feed or eat while he walked. Butterflies were dancing all around us on this hike.  We learned they are Zebra Swallowtail Butterflies. We also came across the spikey caterpillars again and learned they were called Luna Moths.  The hike took us a little under two hours.  We soaked up some air conditioning in the visitor center for a bit before heading back outside.  The helpful ladies at the visitor center told us while it was only 86 degrees but the 73% humidity made it feel like 98. We came across a truck with a platform for carrying a cooler in the front.  I told Scott I think he missed some real estate on our van he could have utilized.  He laughed and said he was thinking the same thing.

Back at the campsite we ate some lunch and the kids played in the water and reconstructed the land some more.  We headed to Tim’s Ford for a canoe ride.  Scott decided I should do the steering today.  We canoed for a little bit, but we mostly swam.  Cody was working on getting over his fear of swimming by swimming between Scott and I in the shallow cove we stopped at.

The kids started their time at our stop with their usual tradition, a little rock throwing.  The water was as warm as bath water.

We waited out a storm that hit at about five in a pavilion. Scott cooked us a dinner of baked potatoes and burgers. While the baked potatoes cooked I took out the Banana Grams.  My friend Kathleen introduced Brooke and I to Banana Grams a few months ago.  We played one game the way Kathleen taught us and then Scott suggested the kids would like to play it Potty Grams Style.  Perfect Timing.  The heaviest part of the storm hit just then and despite being a little scared by the thunder, lightning, and wild winds the kids were giggling at all the potty words they were coming up with.

Brooke taught Cody an interpretive rain dance.  Four deer kept us company munching on their dinner while we waited for our apple cobbler to finish cooking. After the Banana Grams lost their “appeal” (pardon the pun) as a game, the kids used them as a building material.

Cody created a pyramid and Brooke created a maze. After dinner Scott put together an apple cobbler in the Dutch Oven. He taught us how to make a twiggy fire on top of the Dutch oven in order to brown the top just perfectly. I worked on this post and Scott worked on finding some whitewater for us to canoe. He has his sights set on the Hiwassee River with some class two rapids.  He is pretty sure we will have to swim a few times, as in we were going to lose the boat from flipping.  I am not so sure it is a good idea when Cody is still struggling to find his confidence with swimming, let alone swimming through a rapid and holding onto his paddle.  But then that is how this usually works.  Scott comes up with a crazy idea, I  worry my way through it, and we all manage to live anyway. More on that later…

As we looked around the pavilion to make sure we had cleaned everything up and didn’t leave anything behind, Scott and I had smiles on our faces.  Tonight brought to life the saying, “Home is where you make it.”  This pavilion felt like home tonight.  Yet, just like with any home it is just a building without the people, warmth, and memories made.

You are doing what?