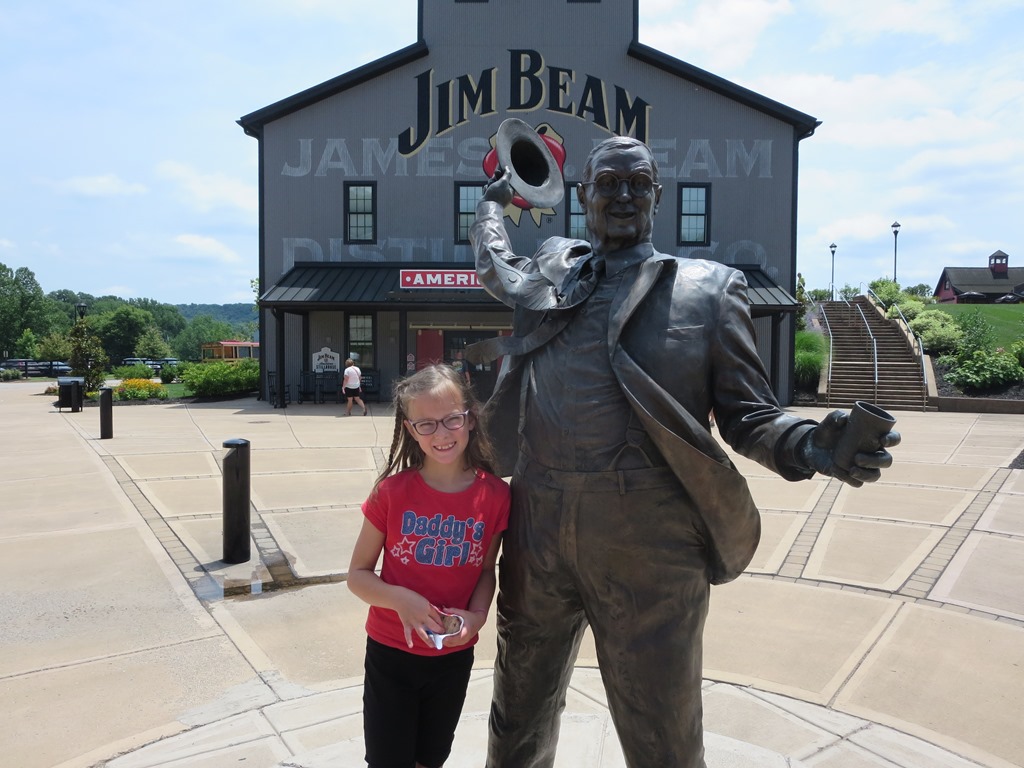 Notice the first picture and where Scott is eating his eggs from?  Someone, I won’t name names, dropped a water jug on the edge of his plate and sent the eggs flying.

We were still able to leave by 9 even though we spent some time helping our camp neighbors with their stove and fire.  Scott had offered them help several times yesterday, but I could feel that the main momma in charge was determined not to get any help from a man. Finally this morning as I was taking down my failed attempt at drying laundry (it rained again this morning) when the main momma turned to me because I was smiling to myself as she was fuming about her wet campfire wood that wasn’t fuming.

“Well, isn’t that frustrating?” she asked.

“It seems to be a theme with wood from campgrounds this year.” I responded.

Then the youngest lady shared with a defeated look that their camp stove wasn’t working either. They had hungry kids and no way to feed them.  I offered to have Scott check out their stove, and they eagerly agreed. I admire their independent determination, and I appreciate that Scott was willing to help them out.  It reminds me that I need to have Brooke and I pay more attention to the cooking aspect. I do most of the cooking at home, but when we camp it is usually Scott who takes the lead on the cooking and the cleaning of meals. I think this started because when the kids were younger I would need to feed them baby food or milk or entertain them while he prepared the meals. Now the kids do a decent job of entertaining themselves.

Scott planned the timing of today’s tours perfectly.  However, it turned out that we would have to wait around for an hour and fifteen minutes for the next Jim Beam tour.  Thankfully the kids found entertainment with two kittens.

Jim Beam is made from at rye, malt, and at least 51% corn.  The tour guide encouraged us to taste the mash along the way.

Our tour guide, Stacy, explained how the mash is distilled twice.  She also showed us the charred inside of the barrels that they use only once.  We watched as some people bottled their own personal bottle to take home.

The kids were full of questions about the process and politely paid attention about ninety percent of the time.  We visited a decanter room that had many interesting designs including a chain saw decanter.  We saw the 13,000,000th, 53 gallon, barrel filled in 2014.

I was a little nervous about bringing kids along on a Jim Beam Tour, but the behind the scenes assembly line and storage warehouse was quite interesting to the kids.

The adults were given two half ounce samples after the tour.  Scott and I shared. He and I both enjoyed the Bakers more than the rest, but did not purchase any as our desire to drink Bourbon does not outweigh its price tag.

“Sweet Baby James” by James Taylor eased out of the van speakers as we headed towards Mammoth Cave.

I had to take a picture of Scott’s clothes bin.  The kids and I have bins that are tough to keep the lids on because we have stuffed so much in. I was telling this story to our Amish friends we were chatting with after they looked at the shirt he was wearing and asked if he was a doctor.  He has mostly only one type of shirt on this trip, The shirt reads The Illinois Bone Institute. Even better the shirts are in a bone shape.  So for a twenty-eight day trip Scott packed a pair of pants, a few pairs of shorts, and four bones!

After arriving at the Mammoth Cave Visitor’s Center we discovered…SUMMER! It was hot and steamy!  Hello ninety degrees!  We haven’t seen you since last summer!

The Green River is at 17 feet and anything above 10 feet is considered flood stage and unsafe for paddling. No canoeing on The Green for us on this trip.

We headed to the Campground first to try to secure a spot for the night.  Scott let the ranger pick a site so we could quickly get to the Visitor’s Center to try to get on the last Historic Tour of the Day at 3:45. We made it!

While we waited for our tour we checked out the Mammoth Cave Visitor’s Center and worked on the Junior Ranger Badge work.

The Mammoth Cave video started out with a statement that rings very true to Scott and our family, “Exploration is at the heart of the human experience.”

The Historic Tour has four hundred and forty steps. It takes two hours to complete the two miles through the Bottomless Pit, Fat Man’s Misery, and up Mammoth Dome Tower.  The only wet part of the cave is at the entrance.  It was nice that most of the tour was dry, but that also meant that the stalactites and stalagmites that everyone thinks of when they think of a cave were nowhere to be found.  No water means no minerals dripping and forming cave features.  We were not allowed to use flash photography on the cave tour, so we did not have many opportunities to take pictures.  We used a small flashlight a few times to get pictures, but a bright flashlight after being in almost complete darkness was a bit of a shocking experience.  We all enjoyed the moment when our ranger, Kevin, turned out the lights and asked us all to be silent.

The picture above and on the right is of me trying to negotiate Fat Man’s Misery.  I was able to walk normally through most of it until my hips became wedged.  Caving is another example of Scott’s influence.  Scott frequently went crawling around in tight spaces with a carbide lamp in caves during college.  I, on the other hand, would wish him well and stay home as sometimes tight, dark, and stale-aired spaces get the better of me.  The tight spaces didn’t bother me hardly at all today. Although to be fair most of the spaces were quite large. We went hiking at the Crater’s of the Moon National Park two years ago and I enjoyed those caves too.  All except the cave that had signs that warned of previous and impending collapses…

While we enjoyed the cave hike it was rather flat.  Which makes it ideal for taking over a hundred people at a time through on tours, but we wanted a little more.  Brooke said, “That hike wasn’t a challenge. It was just like a two mile walk.”  She is her father’s daughter.  We all agreed though. We like our hikes to have a little more challenge to them. So that led us to our decision about the next day…more cave hiking!

We cooked up a butter noodle package and some chicken.  We were a little rushed to finish and clean up dinner and make it to the 7:30 ranger talk. Scott stayed back to clean up while I took the kids to the ranger talk on the Power of Water to shape things like caves. Staying in the park made for a quick walk/ bike ride to the ranger talk.

The mom in front of us came fully prepared with Star Wars fruit snacks, glow sticks, and marshmallows as the ranger talk was a fireside chat complete with a real fire. Cody had to point out every time the mom brought something else out.  Note for tomorrow night’s ranger talk: marshmallows and glow sticks.

Those little black dots in the sky were bats swooping down as we left the ranger talk.

On our way back to our site Scott stopped to help a couple trying to unlock their vehicle with their keys stuck inside.  While I was blowing up the mats Brooke decided Cody needed a spray down from the sun shower which hadn’t had any time to warm up.  The kids were super giggly and rambunctious.  Scott didn’t return back to the tent until the kids and I were long asleep.