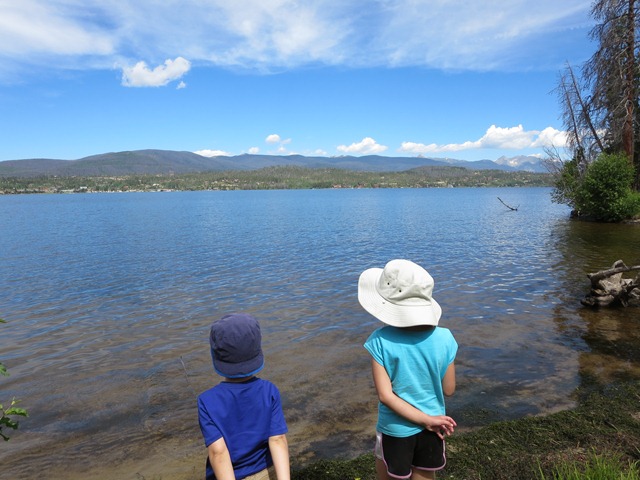 After a quick breakfast of cereal we went for a hike in Rocky Mountain National Park just outside of the Green Ridge Campground we stayed at. We hiked the East Shore Trail along Shadow Mountain Lake one hour each way 3.2 miles in total. The kids did a great job. They wanted to keep going, but Scott and I decided that we should probably turn around after an hour. Cody started the hike with rock throwing into the lake. He cracked us up when a few feet into the trail it opened into a forest and he said disappointedly, “Well, I can’t throw any rocks in here.”

The hike started at the headwaters of the mighty Colorado River, although as with most things it is not so mighty in the beginning.

There were many downed  trees due to the decimation caused by beetles.  In fact, there was an entire campground in the Rocky Mountain National Park that was void of mature trees.  The park cut down the dead trees because they were a potential hazard to guests.  We had to do the limbo under these trees to get through.  Then we used some downed trees a bridge over some swampy spots.

The kids were on a quest for a perfect hiking stick.

I love the way the cirrus clouds are stretched across the sky here. Scott saw this spider crawling along the trail. It was about 3/4 of an inch long. He wants to determine what type it is. Cody was pretty tuckered out near the end of the hike. The only thing that kept him going, after he was done munching on snacks, was the promise of getting to throw rocks in the lake again. He found a giant rock that he wanted to throw in the water when we got closer. We worried about him carrying anything since he could barely lift his little legs. His big sister volunteered to carry it for him.

After the hike we stopped in Steamboat for a few things. Scott then spent an hour or so learning about trails to ride in the area and he found a spot to disperse or (dirt road) camp.  The road where the tent was was so steep and holey that we had to park the van a ways away and down the hill from the tent.  Cody fell asleep on the way to the dispersed camping.  It turns out the bumpy road rocked him to sleep.

We cooked up dinner in a beautiful meadow.

The kids ate dinner at the chuck box.  They were pretty cute talking around the box to each other.  The Roll-A-Table is a bit tall for the kids, so Brooke moved them over to the chuck box for better comfort.  The bugs were a little attentive here.  The kids really liked the bumble bee in the garbage can.  They said, “Look Mom!  It is like the bumble bees that Aunty Tiffy likes to pet in Alaska!”

Scott headed down the trail at about 7:20.  He rode down Spring Creek trail from our campsite for thirty minutes.  The trail head was across from an actual campground.  We think the name is Buffalo Pass. Then he spent an hour riding back up to the campground before he was picked up by two trail builders from Austin, Texas. Ryan and Susan from S&S Trail Services take a road trip every July to September to build trails in cooler climates.  Susan held Scott’s bike in the back of their sprinter van for the four miles straight up the road.

While Scott was out and about Cody worked on Legos and then eventually worked on his summer learning workbook after some peer pressure from Brooke.  Those two love to compete.  Although Brooke became quickly frustrated when she couldn’t keep up with how many pages Cody was competing since Cody’s workbook asked him to work on writing his numbers and coloring and Brooke had to read stories and write synonyms and antonyms. The kids were so into their books that I had to literally steal the books from them to get them to sleep.

Scott arrived back around 8:40.  He cleaned up a bit and then headed over to a neighboring campsite.  Bob was a Sheridan hotel manager who just back from Hawaii and Eric was a high school physics teacher from Denver.  After I finally got the kids to sleep I headed across the way to chat and share the campfire.

We headed back to our tent around 11.  I drifted off to sleep sometime around 11:30.  Scott was still awake when I was startled out of my peaceful sleep by the voice of a sheriff’s officer shortly after midnight asking if there was anyone was in the tent and if we could come out and talk.  The first thing I was faced with was his rather large shotgun across his chest.  I was a little more than startled.  Scott kept reminding me afterwards that it was probably quite an adventure for the police to be waking  everyone up from their tents in the middle of the night.  Apparently someone had borrowed someone’s cell phone screaming and shouting for help and called 911.  The police had to go tent to tent to try to hammer out the mystery.  It was difficult to get back to sleep after that.  However, I did discover that even with the tent fly on I could stare out the tent’s back window and fall asleep staring at the brilliant star scattered sky.