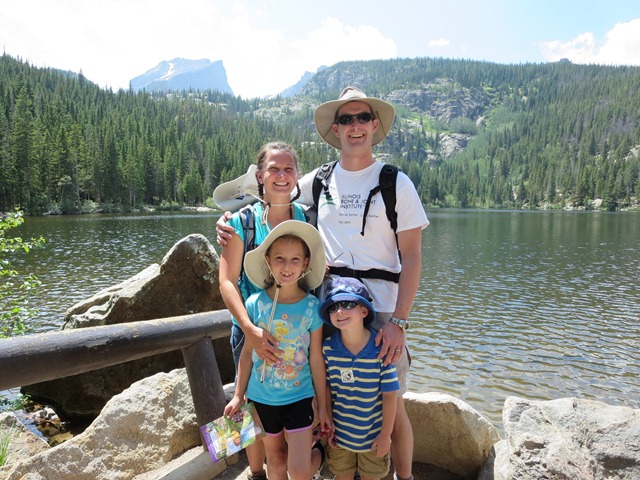 Yeah Colorado!!!  I love the mountains and I love Colorado.  Although waking up this morning was a little rough since I didn’t arrive home from visiting my brother until midnight and then I was wide awake at 5:30.  I must have drifted back to sleep because the next thing I knew Cody was hopping on me. The view is from where we camped in between two RVs.

We stopped at McDonald’s just for the bathroom, water, and the free wi-fi.  We weren’t really freeloading as we had splurged on cheeseburgers the night before.  The kids loved getting all the free informational brochures.

We snapped a picture of Este’s Lake from the highway.  Our first stop of the morning was at Moraine Park Campground to try to reserve a spot for the night.  We always seem to run into a challenge finding a spot to stay in popular areas on the weekend.  Scott stood in line for about forty-five minutes enduring cold winds and eventually rain just to be told there were no spots.  No fear, the kids did run him a jacket when the rain really started to come down.  Brooke was enjoying dancing in the rain and didn’t want to come in the van when it was blowing sideways.

We headed to a picnic bench for our breakfast/lunch around 11. Luckily the tree that shaded the bench kept it dry. We cooked up some pancakes and shared our leftovers with some lovely ladies hiking. On the off chance that a miracle might happen we headed back to the campground to see if there were any openings. In true Scott luck style a cancellation had just occurred and we not only got a site, but a most magnificent site. The view was incredible and the kids loved playing in the rocks so much that Brooke even became teary eyed when we had to move to a new site.

Next on the agenda was a hike on Bear Lake Trail and Nymph Trail. We needed to take a shuttle to get to the hiking trails. Bear Lake Trail had numbers along the route that corresponded to a booklet that we didn’t know anything about until we came upon a ranger more than halfway through the hike. It didn’t matter that we had no idea what the numbers really meant, to us it meant Cody flying along the trail in hot pursuit of the next number. Cody was hoping for numbers on our second hike at Nymph Lake too. Scott tried to lure him along saying the numbers must be further up, but he was not fooled.

I could have sat on this bench enjoying the view of Bear Lake for a while, but even though the kids were exhausted they couldn’t sit still.  In the picture of the tree roots Cody is poking his head out in the lower left hand corner through the roots.

Scott tried to talk himself out of a bike ride several times, even after he was dressed and ready to go. The fat but scattered raindrops almost sealed the deal, but then I convinced him he would feel better after a ride. He said it was quite a challenging ride uphill for thirty minutes straight, but it was worth it as he saw a grizzly bear in the last ten minutes up and the fifteen minute ride down at over forty miles an hour was fun.

The kids and I hung out at their fort while Scott was riding his bike. Cody quickly set to gathering sticks and rocks and storing them in special nooks he found. Brooke set to naming the pathways and other spots. She gave me a long list this morning as we were about to leave: stick mine, coal mine, club house (rock), secret clubhouse ( hidden down below), deer peak, black bear cove (Cody called this Key Lime Cove), river road, black hills overlook, beaver road, berries/ meadow road, valley of fire road (trail to the tent), leaf road, and ridge road.

While Scott was out the kids helped me start a dinner of spaghetti. While we were eating dinner some elk and deer roamed across the meadow also eating their dinner. Brooke said, “It is like an outdoor scenic tour!” Cody wanted to go hug a mule deer that came right up to the kids “clubhouse”. We had to explain that while they were fuzzy and adorable they are also not hugging animals like our cat. While Brooke stood just a few feet from the deer telling it how cute it was a girl came skipping by and Brooke knew it was going to leave. She shouted, “We loved seeing you,” as it ran by. Then she squealed, “That was so cool!”

I got the kids ready for bed and then went for a very quick run in the dark.  Everyone fell asleep sometime after ten.