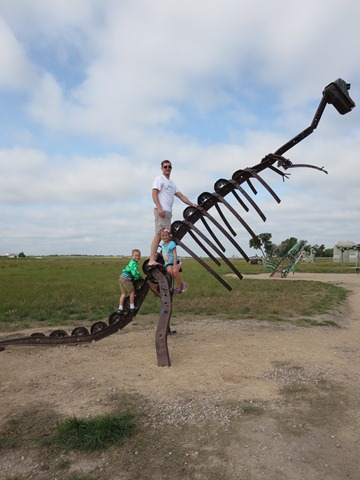 Cody went from super sleepy cutie to wrestling and throwing in less than five minutes.  We had our first non-cooking breakfast of cereal this morning to get an early start on the day.  We are hoping to hit a few touristy spots in Nebraska today and get to see my brother in Colorado tonight.

Yes, we realize Cody probably can’t see anything between his hat and sunglasses.  We keep fixing his hat, but he seems to like hiding under it.

Carhenge (think Stonehenge with cars) located just north of Alliance, NE.  The camp host from Pierce told us about it.  It turns out it was on our twenty year old Rand McNally Road Atlas too.  I loved the picture contrasting the adorable bunny surrounded by the rusty cars.  He quickly disappeared into a hole under a car after the kids caught wind of him.  It is funny trying to explain why someone would do this with cars when the kids don’t have any understanding of Stonehenge.  They loved it even without any context.

Scott had fun explaining to the kids what parts from a car were used to form each piece of art.  Due to their size it is hard to see the kids in the dinosaur and yellow car art, but you can click on the images to make them larger.  I had to ask everyone when their last tetanus shot was before they could climb the dinosaur.  Cody didn’t even go near the yellow car art until Scott and Brooke did.  As he quickly walked past it he said, “That is one I am not going to kick.” He was afraid the cars were going to fall on him.  Notice as I snapped the picture what Cody is doing though.  The picture next to the yellow car statue is of a Buick steering wheel.  We told Cody, “Hey, that might be the steering wheel Jesse James took from the first train robbery.” (See the Day 1 post if you are confused.)  Cody told us to quit teasing.

The last piece of art work spun as you turned the fan blade.  Scott explained that is how a rear differential worked.  Who knew a trip to Carhenge could be so educational?

Scott and I were both giggling about the Midwest tourist stop as we walked arm in arm down the path back to the van.

“What?  It isn’t like it was out of the way.  We went out of our way to make it be on our way,” he defended himself smiling.

“Griswald,” I repeated and laughed again.

In Alliance we saw stoplights.  It is funny how small things like stoplights are common place normally, even an annoyance at times, but when you travel hundreds of miles without one in sight it is suddenly a cause for excitement.

Next we stopped and took a quick hike up Courthouse and Jail Rocks which were significant landmarks on the Oregon Trail, Mormon Trail, and the Pony Express.

Cody was too busy picking flowers to stop for a picture, so I scooped him up.  Brooke couldn’t be left out, so she ran and jumped onto my hip.  It turns out I can still carry both kids at the same time, just not so gracefully.

Cody has been very concerned about me keeping the flowers he gives me.  At home I make sure I get the flowers in water right away, but it is a little more challenging on the road.  I am very thankful for the flowers and for his adorable thoughtfulness.

Chimney Rock.  Notice on the middle picture the small sign warning of rattlesnakes.  Scott happily shaved while on the way to Scott’s Bluff.

Scott’s Bluff National Monument was next on our list.  The kids earned their first Junior Ranger badges this summer from here.  Cody did a great job of drawing a wagon on the Oregon Trail.

Scott’s Bluff had a paved road complete with three tunnels leading to the top.  It is always deceiving how large the van is in comparison to the height of the tunnels we go through, but there was plenty of clearance.

We walked both ways on the trails up top.  This meant the kids walked over a mile.  There was only a little bit of complaining about being tired, hungry, and hot but thankfully a bench popped up just in time.

We told the kids they could just relax on the bench.  That we would be back in just a few minutes, but they quickly scrambled up and suddenly had a lot more energy to hike.  Funny how they are more energized when hiking is their idea.

While the kids and I turned in their ranger badge work and took some pictures in front of the wagons along the Oregon Trail Scott cooked up some oatmeal for lunch.  I know it sounds odd, but while we were hiking we were trying to talk about lunch in some really broken Spanish.  I remember little bits and he remembers even less. I was trying to keep the topic on the down low so the kids wouldn’t suddenly remember they might die before we get them lunch.  In their defense it was late.  When Scott finally understood that I was trying to communicate about lunch he quietly suggested PB & J and turkey and cheese again.  We both grumbled.  I suggested oatmeal.  He said he had been thinking about oatmeal too.  SOLD!  I told Scott I had to get a picture of our oatmeal lunch.  The picture is priceless not because of Scott’s funny face, but because of Cody’s reaction to Scott’s face.  Sometimes our kids think we are silly.  I don’t see this improving anytime soon. 🙂

After all our site seeing we headed to Wal-Mart and then to the road to attempt to meet up with my brother by 8:30pm in Colorado.

Thankfully and for the first time on this trip both kids dozed off for at least an hour nap.

Just shortly after Cheyenne, Wyoming I said, “Hitchhiker.”  Scott responded quickly, “We don’t have any room hon.”  To which I quickly responded, “I was questioning not suggesting.”  We laughed for a while at that.  Scott is always looking for the next adventure and I am always telling everyone to be careful.

We crossed over the border into Colorado at 7:30pm.  Another new state for the kids.  On this trip they will add Nebraska, Colorado, and Kansas to their lists.  They have been to every other state on this trip in previous trips.  Brooke lamented not too long ago, “When will we get to go east of the Mississippi River?”  Hmm….  It seems we may be partial to heading out west.

We arrived into the outskirts of Longmont a little after 8.  We arrived at St. Vrain State Park at 8:30 and there were of course no spots available.  Thankfully some very kind RV’ers allowed us to throw our tent in between their sites.  We had the tent up in less than five minutes and Brooke worked quickly inside to set up the mats.  I hopped in the car and headed to meet up with my brother.  We only had an hour and a half, but I am glad  we had a chance to connect up.