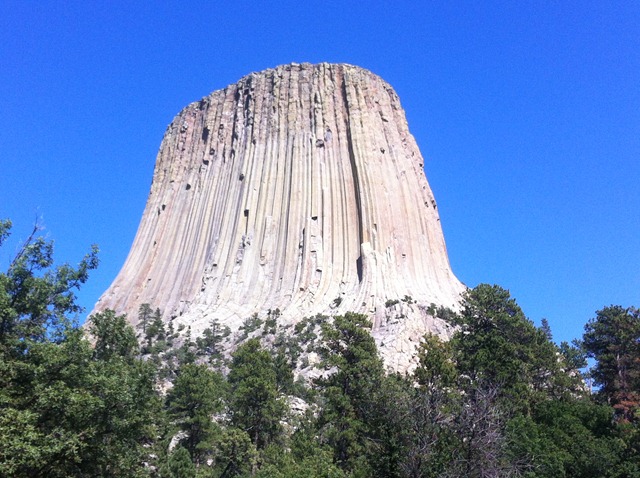 The kids were super helpers taking the tent down and cleaning up camp today.

I was walking back from the water spigot and noticed this in the branches of the pines that were behind where the tent was.  Do you see a smiley face?

Wal-Mart stock up and repackaging action shot.  Scott didn’t warn me he was taking a picture.

Scott cooked up some lunch while the kids played at the park.  When Scott was cleaning up the dishes we noticed a woman with her dog sitting at the picnic table next to us in the sun.  We offered for her to come sit with us at our table in the shade.  We enjoyed our chat with Ellie.  As sweet as Ellie was she left me with a sobering thought.  She used to live in Sheridan, WY where she could see the mountains.  She had moved to Gillette to live with her son.  Unfortunately though, not long after Ellie moved in with her son he passed away.  He was only fifty-six and died of a heart attack.  Her son has only been gone five years, so her pain was still very strong.  After the topic of her son came up it was hard to keep her on a topic that wouldn’t make her sad.  Ellie left me with the reminder that life is not so much about what happens to you as it is about how you deal with it.  It cannot be easy being in Ellie’s situation, but I’m sure the amazing moments in her life have far out-weighed the sadness she has had to endure.  Ellie shared that she just keeps asking God to take her because she isn’t sure why God took her son and not her. I hope when I am in my eighties I am constantly reminding myself of all I have been fortunate enough to experience rather than the alternative.

One other odd note, Ellie’s dog gave me my first dog bite.  Thankfully he was a small dog and some of his teeth grabbed my sandal instead of my ankle, but wow that little mouth packed quite a punch.  I did my best not to show the pain, but I did look at the dog for a second in shock.  The dog gave me an indignant, “Yeah, you thought I was a little guy didn’t you?” After I shared the story in the van Scott mentioned that he had to shake the dog off of his shoe too.  Well at least Ellie is well protected!

We packed up and left Gillette in search of Devil’s Tower.

Ada Fry from Lake in the Hills, IL.

In front of Devil’s Tower we met up with the Fry family who happen to be from the same county we are. Scott was wearing the bright orange shirt I picked up from the Human Race in April this year that says our county name across it. Mr. Fry inquired about Scott’s shirt and we discovered that Mrs. Fry works in the same school district I work in. What caused us to stop and talk to the Fry family though was their daughter Ada. She has hundreds of Junior Ranger badges from all over the United States. They are working on 21 badges in their 3 week trip this year. They said last year they visited Washington D.C. and earned 38 badges in two weeks. They said they were exhausted by the time they completed that trip. Ada’s goal is to encourage kids to visit the National Parks and Monuments with their families. Her dad said she is on You Tube and featured in some park newsletters.

The picture of the bear climbing Devil’s Tower is illustrating the Native American Kiowa legend explaining Devil’s Tower’s creation.  It is a little graphic so I’m leaving out the details.

Devil’s Tower is magma that pushed up to one and a half miles below the surface of the Earth fifty million years ago. As the magma cooled it contracted and fractured into columns. Brooke said, “Devil’s Tower looks like a bundle of noodles all stuck together.”

Over millions of years erosion of the sedimentary rock around the hardened magma exposed Devils Tower. The tower rises 867 feet from its base and stands 1,267 feet above the Belle Fourche River which helped with the sedimentary rock erosion. In fact, the tower is still emerging today.  The area on top of the tower is 1.5 acres while the diameter of its base is 1,000 feet.  It is crazy to think that the surface of the Earth used to me a mile and a half above Devil’s Tower.

I wondered why there weren’t more igneous rock features like Devil’s Tower around.  The igneous rock is phonolite, which is a very hard igneous rock found in northeast Wyoming, central Montana, but mostly in east Africa.

We stopped and watched the prairie dogs scurry around for a bit.  Brooke was the first one to hear them squeaking.  “They are just so stinkin’ adorable!” was said more than once while observing the prairie dogs.

South Dakota!  The last new state for the kids on this trip.  That makes eleven new states for the kids on this trip.  We were on a gravel road when the GPS showed that we entered South Dakota, so there wasn’t a fancy sign announcing the new state, but wild turkeys just crossed the road and we have seen a plethora of cows so we can call that our welcome party.  It turns out that the “shortcut” we took to a campground was about forty miles down gravel road 810 with no campground in sight.  We are wondering what happened to the campground that was on the map given to us from a park ranger.  Obviously the road was not a shortcut, but I had to give Scott a hard time because when we finally got back to paved Route 16 we were back in Wyoming.  This made going back into South Dakota more fun because we got to see a “Welcome to South Dakota” sign for our last new state.

Finally!  Camping for the night.  Comanche Campground a few miles past Jewel Cave off Route 16.

The kids were super helpers again tonight.  While Scott worked on the spaghetti, I worked on the tent and the kids worked on pulling dead tree branches from the grassy hill behind our campsite.  The camp host had suggested where to find the firewood, and the kids were excited to get in one more fire.  They even did a fire dance and created some percussion music around the fire.  We worked together like a “well oiled machine” today.  It seems a shame that we are going back to a routine where we will see each other for just a few hours each day.  We can’t be nomads forever and we have seven weeks to be thankful for, more than many ever get.