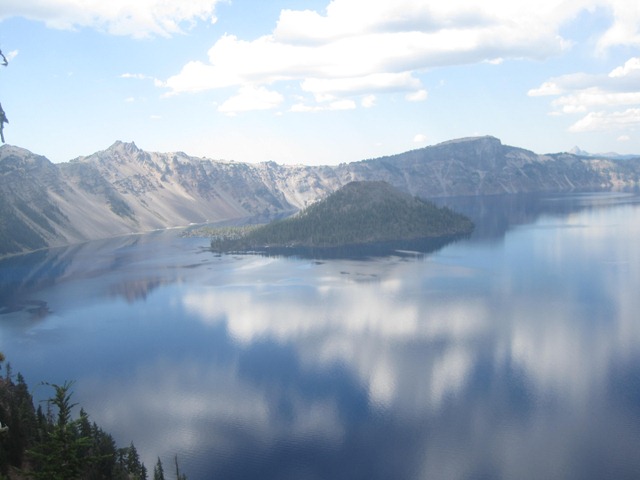 Before we left our campground the kids wanted to throw a few more rocks and leaves into the river.  They had a system going where Brooke would find the rocks and hand them to Cody to throw.  The only problem was that Cody didn’t really understand the idea of throwing the rocks not in the direct path of Brooke.  I think Brooke rather enjoyed the close calls…

12:30 – We got lucky again. Scott just got the last tent site in the Mazama Village Campground at Crater Lake.  Crater Lake is Oregon’s sole National Park. We ate some lunch at our new campsite.  While Scott was cooking up lunch I set up the tent and hung up some laundry to dry.  The kids came up with a game of bowling that involved using rocks for pins and for the ball.  It reminded me of The Flintstones.

Crater Lake is actually a caldera.  In the mid 20th century geologists refined the definition of craters and calderas.  A crater is the surface opening of a vent that feeds the volcano.  The top of Wizard Island (the picture above and on the right) is a crater.  A caldera is a basin many times larger than a crater often caused by a collapse of a volcano.

Crater Lake began as Mount Mazama which formed over 400,000 years. It erupted many times, but it had a massive eruption 7,700 years ago that emptied the magma chamber below which caused the mountain to collapse on itself.  Over centuries the deep caldera filled in with five trillion gallons of rain and snow melt.  Crater Lake sees an average of forty-four feet of snow annually.  The maximum amount of snow received in one year was seventy-three feet in the 1930s.  It is common for the area to have fifteen feet of snow piled up at one time.

The ranger led activity was on volcanic rocks and whether or not they float.  Pumice was able to float due to the air pockets inside.  However obsidian did not float.  The kids earned a patch just for watching and participating in the ranger activity.  After the ranger activity we finished the junior ranger books and earned another badge.

At 1,943 feet Crater Lake is the deepest lake in the US and the fourth deepest in the world.

The pictures do not do the lake justice. The water is a crazy blue and on the outskirts a beautiful green-blue.  Why is it so blue? Due to the lake’s extreme clarity and depth the longer wavelengths of light (red, orange, yellow and green) are absorbed as they pass through the surface of the water leaving only blue and violet wavelengths to be redirected back to the lake surface.  The edges are less deep so some of the green sunlight is reflected back up.

There are no streams running into the lake, so the water is very pure. The picture just above and in the middle is of a secchi disk.  Secchi disks have been used since the late 19th century to measure the clarity of water. The sixth graders at my school were able to see one of these during a field trip to measure the clarity of our lake thanks to the head of the Nature Center.  I’m pretty sure on that October day the secchi was no longer visible after five feet.  The record for visibility at Crater Lake was 144 feet set in June of 1997.  Part of keeping Crater Lake clean means no private boats or scuba diving.  Although you can swim if you brave a hike with a 700 foot elevation change into and out of the lake.

We drove around the lake a little bit to get a better view of Wizard Island.

Before dinner Scott replaced Brooke’s bike tube in her rear tire.  He had to do this on Brooke’s bike (now Cody’s) in Alaska too.

Cody and Brooke had their first sun showers.  Scott tried to warm the sun shower since one o’clock when we arrived.  Unfortunately, the water was still a wee bit frigid.  Brooke and Cody were covered head to toe in dirt as they were up to what they are always up to – digging in dirt.  If you notice in the picture up above and to the left Cody has a lovely spot of dirt smack in the middle of his forehead. So Scott thought a shower was in order.  He also thought Cody would love the shower since he is always complaining that the showers are too hot.  However, the sun shower was not very sunny warm.  Cody made it through chattering and I held him afterward to warm him up.  He bounced back quickly.  Brooke was a real tough lady.  She never squealed or squirmed.  Both kids stayed clean for about ten minutes!

What an incredible evening.  The Jiffy Jambalaya was good.  Scott had purchased French bread and we opened a bottle of wine.  Mmm…   Then I went for a jog with Brooke as my running coach.  She rode her bike and I did my best to keep within two hundred feet!  She was a great coach though.  I told her I was ready to just walk about twenty minutes in, as she was going a lot faster than I usually do.  She slowed down, let me catch up, and then slowly increased her speed.  All very stealth-like.  She got me to my goal of thirty minutes of running though and she even walked with me after that for a cool down.  After a quick stretch I headed to a “secret” shower Brooke found in loop F of our campground.  We were in loop G at site 17.  Brooke pointed out the shower while I was jogging and I had to check it out.  The sign on the door very clearly warned that the warm water was limited, but I had to chance it.  I had a shower much the same temperature as Brooke and Cody’s.  No warm water at all.  I would dance in the water, dance out, suds up, dance back in and repeat.  Every time I went in the water it took my breath away.  No complaints though.  I am clean!  A shower in less than a week!