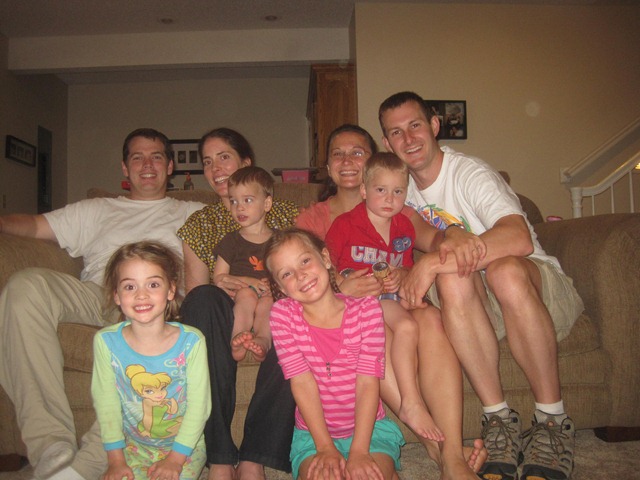 Scott had been up since 4:30.  I won’t name names, but someone took his usual pajamas in a quest to clean every last piece of laundry.  Thus, Scott woke up cold, and then neither of us had much more sleep.  I still managed to get out of bed around 6 in order to get in one last run with Kayla.  We ran four miles and were only a little lost for a little bit of the run. Other than wild animals, getting lost is my next biggest worry about venturing off and exercising by myself on the road.  I wasn’t concerned with Kayla, but my worrying might deter me from getting in as much exercise as I should on this trip.

After a quick shower and some breakfast Kayla headed to church with me.  There were a myriad of churches I could have chosen.  I just picked the first church I came to when I went biking the other day.  The church we went to also had an early 8:30 service, so I wouldn’t be holding up our family’s departure too late.  The Senior Minister, Seth Wortman, headed straight for Kayla and I, and introduced himself.  Not only was the minister warm and welcoming, but the wife of the family next to us was singing on stage, yes I said stage, and was also kind enough to say hello and say some welcoming words.

The 8:30 service was advertised as the traditional service.  I had to wonder if that was their traditional what the contemporary service looked like.  They had not one, but two large screens that displayed the songs sung and the verses read.  There was no need to be lost in page turning.  The music was beautiful and moving. They had two missionaries from Africa come to speak about their missions.  Missionary work has always intrigued me.  In fact, before I met Scott my freshman year of college I was seriously contemplating Peace Corps.  That wasn’t something that interested Scott at the time. After listening to the missionaries I know missionary work is not something to be taken lightly with small children.  It is wild enough “living” out of a van for two months, let alone always having to have a “Go” bag ready just in case the community you are living in decides they are ready for you to leave.  Both of the gentlemen speaking had small children.

I appreciated the music and missionary insight.  We were able to sing one of my favorites, “How Great Thou Art.”  To be fair, no matter what church I venture to it will probably never compare to the sunshine streaming in through the stain-glassed windows of my church home.  I also missed my church community and our dynamic pastor.  However, it was nice to fill my heart on Sunday morning.

After church Ed wrestled with the kids while I packed the clean laundry into the bins in the car.  The kids kept asking to be taken to China and Japan because Ed would say, “I’m going to take you to China town!” Kayla was masterful with encouraging Cody to quickly take a shower so he could play some more basketball.  Cody took a shower very quickly with no crying.  Yesterday he cried through his entire shower.  Ed and Kayla make a great team with entertaining the kids.

The first song that randomly came onto my Nano while I was sorting laundry in the van was, “You’re Going to Miss This.”  How true.  I am going to miss the comforts of a friend’s home and the amazing company.

We were spoiled yet again at lunch with Chinese food.  Brooke loved reading the fortunes from the fortune cookies even though she did not consume a single cookie. The first fortune cookie read, “ Your travels east will bring you great rewards.”  Kayla mentioned that it was too bad that we weren’t heading east.  However, much to my surprise I had discovered last night looking over the newly prized atlas that we would be heading just a bit east to get to Buffalo National River.

It was hard to leave Ed and Kayla’s, but we had already stayed much longer than we had anticipated and had a fantastic time.

Ed playing with the kids.  They wanted to be bundled up and dragged across the floor.  Odd but entertaining.

Cody wrestling Ed and Ed threatening to put Cody in the garbage.  Cody kept running back for more.

Kayla suggested a group shot.  Scott managed to get the timer to work.  Brooke and the Little Miss hugging goodbye.

The hope was to have the kids nap on the way down to Arkansas.  Instead we have two adorable children very much in need of some rest and not in the least bit likely to get any. Consequently trying to concentrate while typing is challenging at best.  Cody has been singing and coloring his Color Wonders a lot today.  His favorite song lately is “Hosana” from the same website his preschool directed us to for the song, “Don’t Be a Turkey Just Say Thanks!”

Most of our road trips include Wal-Mart at some point. We have not ventured to Wal-Mart once thus far.  However, today we visited two Wal-Marts in one day.  The first in Branson was in order get some groceries.  Then we stopped a few dozen miles down the road to get some gas.

Arkansas!  A new state for everyone except Scott.  He has been to every single state at least once.

Scott and I have learned the first week or two of camping is usually the toughest.  We have discovered it is all about acclimating to new routines, well and new temperatures.  (Goodbye air conditioning.)

Brooke cried for about an hour over the heat and the bugs.  We all had some “no see-ums” and flies, but she was by far the tastiest in the bugs’ eyes.  Despite the not-so-nice insects we are also surrounded by brilliantly colored butterflies.

Camping routines: remembering to get ice frequently for the cooler, putting groceries away in our kitchen on wheels in parking lots, disposing of the garbage frequently, filling the waters, tent interior setup, and bathroom breaks.

Brooke and Cody checking out the river model at the Tyler’s Bend Visitor Center at Buffalo National River.  Scott had a brilliant idea to turn this wash basin into the splash pad at the campsite.  Cody was an enthusiastic helper on our first night.  He gathered firewood, poured the corn into the pan, and even tried to help cook.

Cody was watching a lime green inch worm.  The poor inch worm didn’t last long.  I’ll spare you the details, but while I was busy setting up bedtime Cody was experimenting.  We had a long talk about taking care of nature.  Brooke help Scott set up the tent.

After dinner we called Scott’s parents, Meme and Pepe.  We are fortunate to eat dinner over at their home with Scott’s sister’s family every Sunday.  This Sunday was extra special as it was Meme and Pepe’s 40th wedding anniversary.  Calling home was the perfect remedy for missing our friends and feeling just a little bit home sick.  Cody talked with his buddy Taylor who just turned three, “I’m missing you Tey-Tey.  Ride the Jeep.”  Brooke spoke with Alex, her buddy who is five.  Alex caught Brooke up on the latest excavation of Meme and Pepe’s yard.

After dinner the kids kept themselves busy with their National Park Junior Ranger Books until bedtime.  Brooke has earned a National Park Junior Ranger Badge from Denali National Park in Alaska and Glacier National Park in Montana.  This will be Cody’s first Junior Ranger Badge if we finish in time.  The kids have to complete activities in their books, watch a park video or listen to a ranger talk, and do a service activity.  We already watched the video on how they had to fight to save the Buffalo River from being dammed.  The kids will pick up trash from the river on our trip tomorrow, now we just need to finish the activity pages.  The book did a great job of teaching the kids about habitats, river safety, food chains and webs, and fossils found in the unique rocks in the area.

There was a super moon tonight.  Which made it as bright as day in the wee hours of the morning.  Even though it was quite hot both Scott and I woke up cold at some point in the night with just a sheet.  Our tent is quite open and offers a magnificent view of the stars before the moon rises.