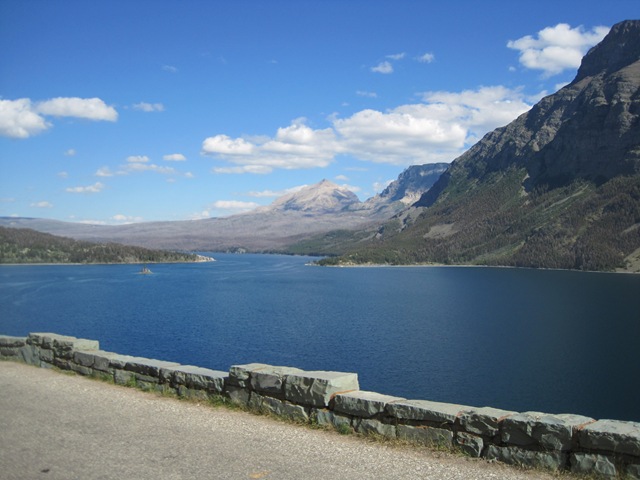 I’m going to try to control myself, but I need to preface this post with the fact that we took 135 pictures today alone.  I’m pretty sure we didn’t take that many pictures in the entire year Scott and I traveled the country.  Thank goodness for the digital camera.

Brooke worked very hard on her Junior Ranger Booklet while Scott made breakfast and I emptied the tent.  Thus, first thing this morning she wanted to get her new badge.  She walked taller and was even a little more helpful after getting her little badge.

The views were impressive.  We arrived on a perfect day with crystal blue skies.  We drove along the Going-to-the-Sun-Road up until Avalanche Creek and then we retraced our drive back to Saint Mary.

Jackson Glacier was the first glacier we were able to see.  I had just asked, “Where are all the glaciers?”

Thankfully the Visitors Center provides you with some MP3 files that you can listen to during your journey.  We found out from the files that at the End of the Little Ice Age in the 1800s there were one hundred and fifty glaciers here.  In  1968 there were fifty. Today there are only twenty-six.  If the current warming trends continue Glacier National Park will no longer have any of its namesake by the year 2030.

The picture on the right is of one of the free shuttles that zoom around the park trying to alleviate the congestion of the two million annual visitors to the park.

This was the “Weeping Wall” that engineers put in when they were constructing the Going-to-the-Sun Road.  It extended along the road for a hundred feet or so and was thirty feet tall.  We passed one motorist on the way back who drove extra close for a nice refreshing surprise of glacial runoff water for his passengers.

Scott hiked the Hidden Lake Nature Trail at Logan Pass.  It was three miles round trip.  We were warned that it was a mad house and there was even a sign that said the parking lot was full, but that didn’t stop us, or the twenty thousand other eager tourists.  Since Brooke and I did a fun hike yesterday we let Scott hop out on his own today (Cody was napping).  It was at this point that I had to stop my memory tape and splice to the point after Scott’s hike.  I’ll try to spare the complete insanity, but the parking lot was like the mall parking lot the week before Christmas.  Everyone was racing to get what few spots there were.  I wound my way through the madness for an hour and ten minutes.  Brooke did pretty well with entertaining herself until the last twenty minutes and Cody only wined a little bit.  I’m just glad Scott had a great hike.  He said it was among his favorites of the whole trip because he saw a multitude of goats and big horn sheep.  He was also above the tree line giving him great views of the lakes and mountains.  The perfect weather was a nice bonus too.

In the picture on the left you can see the goats blending in.  They are in the lower left hand corner of the picture.

Scott said he just missed these two Big Horn Sheep butting heads.  After the encounter they just went back to munching on grass as if nothing had happened.

This sheet of snow came right to the road and had quite an impressive amount of water coming out from below.

There were several impressive tunnels.  They just recently put in the concrete reinforced inner layer.  Apparently rocks were occasionally surprising motorists with a nice thump on their ride through.  It was one of many improvements they have been making to the park.  The park was celebrating its centennial anniversary this year.

This sticker is only associated with the park in that we parked next to a fellow Chicagoan at our lunch spot who had the sticker and Scott just couldn’t stop laughing.

At the Trail of the Cedars we all hopped out, ate some lunch, and hiked.  The trail was mostly all boardwalk.  The fresh clean cedar scent once again enveloped us.  The hike was nice and easy, filled with streams and waterfalls.  After forty-five minutes of a relaxing hike it was time to hit the road again.  This might be our last hike of the entire summer journey.

The moist environment keeps wildfires at bay, but it also causes the cedars to keep their roots shallow.  Trees with shallow roots tend to fall victim easily in high wind storms.  the tree on the right was one of many that had toppled over.  Brooke was showing us how big the root system was.

The picture on the left is of the triple arches.

The rock was a magnificent red in many areas of the park.  The picture on the right was taken during a construction delay.  It was one of a few pictures Brooke actually smiled for.  Construction workers were working hard to repair the very old road which resulted in a few delays.  This was the longest we waited at a delay, only about five minutes.  They warned us that there might be up to a half hour of cumulative delays throughout the drive, but we seemed to hit them all just right.

We were very thankful for such a beautiful day considering all of the rain we have had on this trip.  I have to add this to my list of favorite National Parks.

After a long day we headed down Route 89 to Route 2 to a town called Shelby, Montana.  We found a park to cook our spaghetti dinner at and for Brooke to play.  While we were there a dad and his four year old boy showed up.  Scott asked him if he knew of a place to camp.  It turns out the town did have a free campground down by the river.  The only problem was that you had to follow some gravel roads to get there and we wound up in someone’s front yard instead of the campground.  It turns out they were having a wedding / ninetieth birthday party.  Scott hops out of the van to some pretty puzzled faces and shouts, “I’m here for the party!”

Not only did they give us the correct directions to the campground, they offered him a beer.  Then after we arrived at the campground and were settled in Scott headed to chat with our only campground neighbors while I helped the cuties get to sleep.  He chatted with them over two hours and some more friendly beverages.  It was nice to be able to go to sleep knowing there wouldn’t be any bears eating outside or inside my tent.