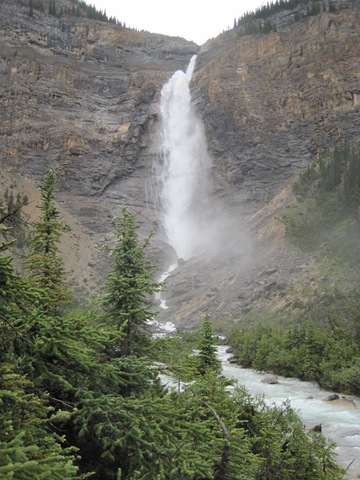 We started the day in the Ice Fields Parkway of Jasper.

When we visited Lake Louise (Banff) on the way up we decided that if we had more time later and the weather was more cooperative we would like to come back.  Unfortunately the day we were able to come back it was raining, hard.  The hike to the top of Lake Agnes overlooking Lake Louise was supposed to be 2 1/2 to 3 hours roundtrip.  There is a place to have tea up at the top.  That was the plan.  The weather had other ideas.  Not only was the rain pretty strong, but there was also lightning.  We thought we started after the lightning had passed, but no such luck.  Of course after we decided to turn around there wasn’t any more lightning.  We were already wet, which was Scott’s argument to keep going, but I don’t think I’ve ever been so close to lightning out in the open. Brooke and I heard it sizzle on it’s way down.  It struck behind and to the right of us, but it was too close for my comfort.  We made it fifty minutes before I threw in the towel.  We literally needed one.  Everything was dripping, except Cody, he stayed nice and dry in his makeshift raingear.  Scott was severely bummed, and wanted to finish the walk by himself, but I knew I would have a tough time getting Brooke back to the car by myself since she was cold, soaked, and done with hiking.

We went on to do a drive-through version of Yoho National Park.  This meant going back into British Columbia after just arriving in Alberta yesterday.  Brooke fell asleep in the van so Scott ran and took photos while I kept the kids company.

Then we were off down the highway again.  We had a brief dinner of sweet and sour pork chops while we swatted away the little flying vampires.  A lady walking her dog stopped by the rest area and after chatting with her we discovered that it was only another forty-five minutes until the Hot Springs.  We also discovered that all of the land between the rest area and there was private.  Meaning there would be no National Forest Land to camp on.  So we went for the Hot Springs Campground and our last National Park of the day, Kootenay.

We are glad that we went to the campground.  We met a very friendly farming family from Buck Lake, Alberta.  The three kids were all grown and camping with the family and the two family dogs.  Cody loved the mom and the dogs.  He did his adorable head lean and snuggle with them.  The family invited us out to stay with them. We could have kept chatting all day, but Cody needed to get in his mid-morning nap.