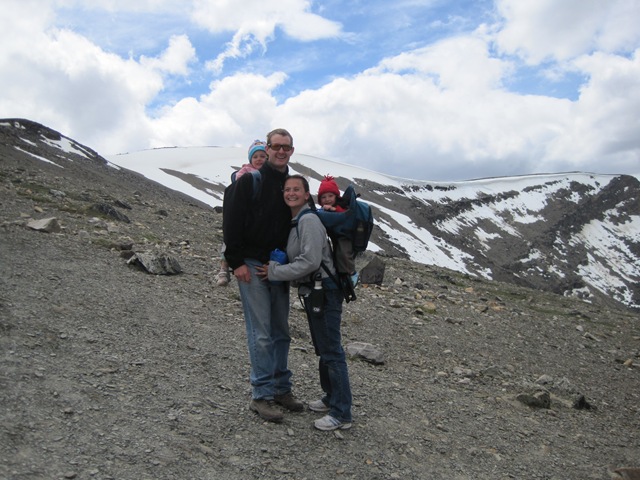 Scott made a delicious breakfast this morning of Pan Fried Granola from the Cooking the One Burner Way book by Melissa Gray and Buck Tilton.  When Scott and I traveled the country back in ‘97 we enjoyed many good meals from this book. After Scott made the blueberry bread and Brooke’s first campfire he sat down and looked through the book again for the first time in a while.  Breakfast was delicious!

We visited Athabasca Falls this morning and after a short look around we ate lunch here too.  We learned that the hard Gog quartzite and running water was responsible for creating this beautiful landscape.  Softer rock would have just been smoothed into a decline, but because the rock broke off in chunks it created Athabasca Falls.  We followed the Athabasca River most of the day.

The next stop was the Jasper Tramway.  the kids rode their first Tramway up 1200 meters.  It took seven and a half minutes and it was quite a climb.  We learned the water came up in the bottom of the tram throughout the day.  They hooked a line up at the bottom to fill the tram and then emptied it at the top.  The waste water traveled all the way down via a tube.  It doesn’t seem like that big of a deal until you know that there is a restaurant at the top too with no access road, only the tram.

There was a steep 1.5 km trail you could climb at the top.  They weren’t kidding when they said steep.  I was happily gasping for breath with Cody on my back until I saw a man start to slip and fall on his way down, and then it hit me.  For every step I was making up I would have to get Cody and I back down, and it was a looooong way down.  Added elevation, lack of oxygen, and the look down convinced me that I would rather meet other climbers resting and let Scott get the glory of the top.  Really, it was my duty of the day to be The Whistler’s Mountain meet and greeter.  I met a lovely gent from England and a very friendly couple on holiday from Australia.  Random friendly visitors convinced me I should keep going at least to the first plateau, and I’m glad I did.  It was nice to be able to stand up straight without grasping onto a rock outcrop as a security blanket.  I met back up with Scott on his way down and he was able to convince the Australian couple to go to the top.  I hope they made it!  Check out the view…

On the way up Jasper Tramway

That dot in the center of the picture is the visitor’s center, and this is only a few minutes into the hike.

Brooke and Scott at the summit of Whistler’s Mountain, 2,466 meters. Brooke took the picture of Scott. She’s getting pretty good with the camera.

Notice how the mountains look small?  See how the clouds look like you can touch them?  That’s how high we were! Thankfully I just watched Scott and my footing on the way down.  I did anything but look at what sloppy footing would result in.  I’m pretty sure someone replaced my legs with Jello.  I have walked up higher vistas with Scott, but that was B.C., before child.  It is one thing to fall on my own, which I have (Guadalupe Mountain in Texas), but I’m not sure Cody would appreciate any more bruises than he already has…  Thankfully on the way down the kids were not only safe, but they were both sleeping!  Cody is draped over my shoulder and Brooke actually took an hour nap!

Then it was time to go back down.

We ate dinner at the local Jasper Park and we are driving late to a campsite somewhere between Grande Cache and Grande Prairie.

The hunt is on